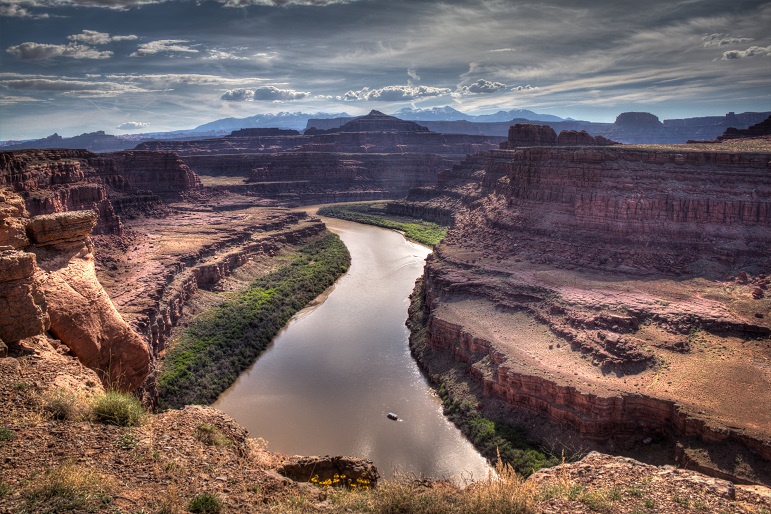 In 1869, Major John Wesley Powell, a one-armed Union veteran of the Civil War, led the first expedition down the Colorado River, including the first passage through the Grand Canyon. Today, just to see this river is a bucket-list item for many.

The Moab Information Center has a special exhibit celebrating the 150-year anniversary of Powell’s historic journey.

pulse of the desert

More than just a river, the Colorado is the heart and soul of Moab. Whether you’re on a peaceful float or a thrilling rafting trip, the massive sandstone spires and redrock walls provide an awe-inspiring backdrop for this aquatic playground.

Recreation is central to this stretch of the Colorado River. As the only part of the river reachable by paved highways in Utah, the area around Moab and the Colorado River is one of the most beautiful in the United States. To experience this unforgettable scenery, we recommend driving Utah Hwy 128, a scenic byway.

From the family-friendly Fisher Towers float, to the technically challenging Westwater Canyon section, the Colorado River has something for everyone. Rafting, canoeing, kayaking, paddle boarding, and boating can all be experienced on Moab’s slice of the Colorado River.

As the Colorado River passes Moab, the water is calm and the river valley wide before it becomes a mix of rapids and canyon waters.

The Colorado River and the use of its water has shaped the history of Utah, Colorado, Arizona, California, Nevada, New Mexico, and Wyoming, which depend on it and its tributaries for life-giving water. In these states, the Colorado River supplies water for 40 million people and has transformed desert land into four million acres of irrigated farmland. These seven states, plus Mexico, and 23 Native American tribes share water rights to the river under the Colorado River Pact of 1922.

It all starts as a trickle of snowmelt high in the Colorado Rocky Mountains. From there, it begins a 1,450-mile journey through mountain canyons and three major deserts.

More water is distributed from the Colorado River’s 250,000-square-mile basin than from any other river basin in the world. Every drop of water in the river is fully allocated.

Controversies over water rights have long raged, giving meaning to the saying: “Whiskey is for drinking and water is for fighting.” The Colorado is easily the most depended on river of the southwestern United States.

The river’s 1,450-mile journey starts as a trickle of snowmelt high in the Colorado Rocky Mountains, then travels through mountain canyons and three major deserts.

The average width is 300ft across with an average depth of about 20ft.

The Colorado has transformed 3.4 million acres of desert land into cities and recreational playgrounds.

The river supports a $26 billion river-recreation industry. The Fisher Towers section of the Colorado is the most popular one-day river trip in Utah. Don’t miss a trip down the river!

The river’s flow has shrunk by about 20% since the 1900s, mostly due to climate change. Lake Mead, the largest reservoir in the United States in terms of water capacity, has sunk to the water level it was when first filled in the 1930s, and is only 35% full.

Lake Powell, the second largest reservoir on the Colorado River is only 26% full. Lake Powell has a shoreline larger than the entire Pacific coastline from Washington to California.

The water is currently so low that the ferry that crosses the lake on Utah Hwy 276 can’t run. They have no date for when the service will start again.

These are both huge lakes and these low levels affect who will have water use or get electricity from the dams. The low water also changes the recreational use and experience.

Take Me To The River

Don’t let this river flow by without letting it be a part of your stay.