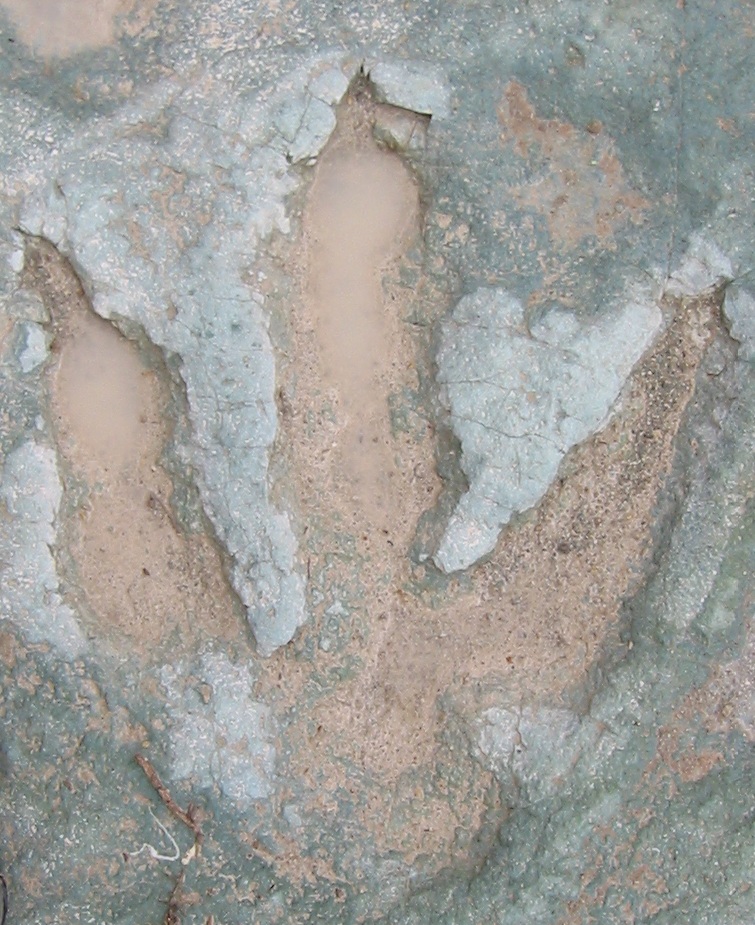 Fossils are fragile, non-renewable, and protected by law. Please follow the laws that protect our fragile and precious resources. Leave things exactly as you found them. Removing and/or selling dinosaur fossils and tracks from public lands is illegal.

The Colorado Plateau covers approximately 130,000 square miles including the southeastern half of Utah and is a huge landform that’s made up of flat land at a high elevation.

The exposed rock layers of the Colorado Plateau provide scientists with an open book of the earth’s history, especially the layers of the Mesozoic Era when dinosaurs evolved and diversified (252 to 66 million years ago). During that time, this area was far from an arid climate, but a landscape that changed from forests to sand dunes to rivers and wetlands, and finally to tropical shallow seas teeming with prehistoric life.

Through erosion, the soil, sediment, and fossils from these periods were exposed in many areas of the Colorado Plateau, allowing scientists a glimpse back in time. Thankfully, the current arid climate has preserved fossils in better condition than elsewhere in North America. The fossil beds tell dramatic stories of individual dinosaur lives and how they ended. Imagine an unlucky dinosaur wandering a little too far into a mud hole and struggling unsuccessfully to escape. It’s no wonder that this part of Utah has the highest concentration of dinosaur tracks in the world.

Map sales help the cause

The Moab Information Center has a pamphlet on tracks and places to see them for sale (proceeds go to the Utah Friends of Paleontology) or visit discovermoab.com/moab_dinosaurs.htm.

The Dinosaur Diamond Scenic Highway, a 512-mile-long national scenic byway, travels through several towns in this part of Utah.

The top of the diamond is in Vernal, Utah with points going west to Price and east to Dinosaur National Monument and Fruita in Colorado. Moab is the southern point of the diamond and has several sites to visit. If we think of this diamond as a kite, then the tail of the kite includes Monticello and south to Blanding where the Dinosaur Museum should not be missed.

For more information on the Scenic Byway, visit utah.com/scenic-drive/dinosaur-diamond.

Walk an outdoor trail with more than 100 life-sized dinosaur models at the Moab Giants Dinosaur Park.

Stop by the Tracks Museum where indoor exhibits highlight stories about fossil footprints. Play with interactive technology, learn about early earth history at the 3D Theater, watch underwater monsters come to life at the PaleoAquarium, and uncover dinosaur bones at the Dig-it-Out-Site. 435-355-0288, moabgiants.com.

The Dinosaur Museum, located in Blanding, houses life-size dinosaur models, skeletons, fossilized dinosaur skin, eggs, footprints, sculptures of dinosaurs from the Four Corners region and throughout the world, and petrified trees that are more than 280 million years old!

They also have a 14ft-tall Therizinosaurus, a towering feathered dinosaur with a 20ft wingspan, that dominates the special exhibits room.

The directors of the museum once sculpted dinosaurs for the motion picture industry so there is an impressive collection of dinosaur movie posters from around the world.

This museum is a perfect stop for the entire family. Open mid-April through mid-October each year. 435-678-3454, dinosaur-museum.org.

The Moab area is home to Lin Ottinger and his famous Moab Rock Shop. Ottinger earned the nickname “Dinosaur Man” due to his many dinosaur discoveries. He was honored for his contributions to the paleontology field by serving as the namesake to a species, the Iguanodon ottingeri.

Inside the shop, you’ll find rocks, minerals, and fossils from Utah and around the globe. Ottinger and his staff love answering questions about the geology of the area and getting people as excited about rocks as they are! 435-259-7312, moabrockshop.com.